skip to main | skip to sidebar

Everyone appearing at ROFLcon (which, for those just tuning in, was a big convention event thing where Harvard folks gathered together a bunch of "internet famous"-type people at, uh, M.I.T.) was asked to provide a bio about what it is they do. This is what I sent them:

"Joe Mathlete has been accidentally achieving internet notoriety since 2002, when a short WMV depicting him engaged in an imaginary lightsaber battle in his high school’s AV room was uploaded to Kazaa. Several years later, after a brief webcam clip of him lipsynching to a popular Romanian techno song achieved similar viral success, he decided to pursue his dream of writing and performing original music. When a video of him recording the vocals to one of his songs gained international attention for his unique, otherworldly baritone and distinctive method of moving away from the mic to breathe in, he destroyed his computer, renounced technology and moved to Wales. He lives in a small cottage south of Llandudno with his cat, Goatse."

If some or none of that makes much sense, trust me-- it's hysterical(ly geeky).
Posted by Joe Mathlete at 11:51 PM 22 comments: Links to this post

Just got back from ROFLcon Where I hung out with a bunch of internet people. It was strange and fun and confusing and interesting and rad. I got my picture taken with Tron Guy, I learned what Twitter is, I didn't get much sleep, I met Damon from Galaxie 500 and Damon & Naomi (unrelated to ROFLcon but it wouldn't have occurred if I hadn't gone), and a bunch of other stuff happened.

My flight home was delayed like four hours so I'm going to pass out now... I'll probably have more to add later on. Much thanks to Tim Hwang and Diana Kimball and all the rest of the folks who organized everything and gave me a neat, surreal little vacation, Alex Gutierrez for letting me crash at her place for a couple days and showing me what there was to do in Cambridge that didn't involve the internet, and to all of the very friendly people I met over the weekend. Until later, if you would like to read a brief interview with a fairly inarticulate me, click with your mouse on these words.

If you have not ever listened to Galaxie 500, now is the time to purchase On Fire (or at least download "When Will You Come Home" or "Tugboat" or "Strange").
Posted by Joe Mathlete at 2:17 AM 25 comments: Links to this post

Please let us know why you are deactivating. (required)

"Facebook is like a creepy and pointless videogame where people collect every person they've ever met, then waste their time spying on all the dumb bullshit they do all day. I don't care if some moron I went to high school with bought a new iPod, I don't want to play the vampire biting game, and I don't want people I don't care about to know what I'm up to if they're not going to bother asking me with words."

You ever hear that Beach Boys song "I Just Wasn't Made For These Times?" Yeah.
Posted by Joe Mathlete at 2:03 PM 50 comments: Links to this post

Labels: hooray it's the future

I lived in Dallas, Texas until I was eight. I don’t remember much about it, other than a few scattered things, but I’ve got very strong memories of sitting in the back seat of my mother’s car and listening to the cassettes she’d play. Mostly 60s rock and Motown and 70s singer-songwriter stuff; I must’ve heard Sgt. Pepper’s a thousand times before I turned six years old. I’m glad my mom wasn’t a Phil Collins fan. Anyway, here are five songs I remember from those days that made me sad:

1. “The Needle and the Damage Done” by Neil Young and Crazy Horse (from Live Rust): I was a very curious child, and a lot of the time I would ask my mom what a song was about, or what the words meant. I guess explaining what heroin addiction is to your five year old is kind of awkward, but if my mom wasn’t willing to go down that road she shouldn’t have been listening to this album. The upside is, I will never in a million years try heroin thanks to this song.

2. “The Partisan” by Leonard Cohen (from Songs From a Room): I mean, pretty much any Leonard Cohen song I’ve ever heard is sad, but this one really stood out. My mom said it was about being in the French Resistance during World War Two and fighting the Nazis. Being in the French Resistance sounded like a total bummer: “There were three of us this morning / I’m the only one this evening / But I still go on / The frontier is my prison” is heavy stuff for a little kid. And then there’d be a part with a children’s choir backing him up on a verse, in French… I mean, damn.

3. “Walking After Midnight” by Patsy Cline (from the Sweet Dreams soundtrack): My mom played the hell out of this cassette after Sweet Dreams, the Patsy Cline biopic starring Jessica Lange, came out. This song always got to me; it’s more upbeat musically than the rest of the songs on this list, but even a preschooler can hear a lady singing about wandering around in the middle of the night being as lonely as it’s possible for a human to be lonely and get kind of depressed. Also, my mom told me the plot of the movie, and how Patsy Cline’s plane smashed into a mountain when she was still relatively young, and that didn’t make things much cheerier.

4. “She’s Leaving Home” by the Beatles (from Sgt. Pepper’s Lonely Hearts Club Band): This song is probably my least favorite on the album, listening to it now; it’s actually pretty maudlin and heavy-handed. But when I was in short pants, that harp and those harmonies tugged at my heartstrings until they were ready to pop. Also it’s a song about running away from home forever, which seems scary as hell if you think about it in a practical sense when you’re half a decade old.

5. “96 Tears” by ? and the Mysterians (from the radio): Not actually from a cassette, but I remember this song coming on the radio one night really really late when my mom was driving my sister and I home from visiting some relatives, and it really freaked my shit out. The organ sounded like it wanted to kill me, or at least sneak up on me while I was sleeping and give me bad dreams. And it was a dude singing about crying! A really unhinged-sounding dude… It wasn’t even that it was sad, it was disturbing. I was like four years old. I asked my mom what the song was called, and when she told me I asked her why he was crying exactly that amount tears. She said she didn’t know, and when my mom didn’t know the answer to a question I asked her it just made me all that much more unsettled. Thanks a lot, Question Mark, you creepy unstable bastard.

My family moved to Houston sometime around my eighth birthday. Sometime after that, my mom sold her car and got one with a CD player and mostly just played Carly Simon albums. And listening to Carly Simon all the time made me sad too, but that’s a different story.
Posted by Joe Mathlete at 3:08 PM 23 comments: Links to this post

This is one of the primary reasons why the internet exists: to showcase the most embarrassing thing a person ever did in their life to the entire world, completely devoid of context.
Posted by Joe Mathlete at 12:31 PM 10 comments: Links to this post

Some more about Robot McGee 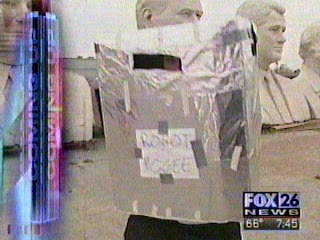 Here's a screen capture from Fox 26 Houston morning news a couple years ago. This is completely 100% not in any way photoshopped or doctored with. I hope it clarifies a few things.
Posted by Joe Mathlete at 3:18 PM 10 comments: Links to this post

By the way: I'm helping my friend do his own blog and it might be of some interest to you

I have a friend named Robot McGee who sometimes plays in my band and is a robot. He recently began a blog where he posts his own descriptions/interpretations of famous paintings. If you have ever wondered what robots see when they look at fine art, this is maybe something you should check out.

Note: I have to do the postings myself on account of Robot McGee himself is banned for life from using anything Google-related and thus cannot operate a Blogger account (he assures me it is a long and boring story, and when an android tells you something is boring you had better not second guess it); my name shows up on the posts but I promise that it's actually written by a real live robot.
Posted by Joe Mathlete at 5:58 PM 17 comments: Links to this post

Time for a nightmare!

Posted by Joe Mathlete at 1:03 PM 17 comments: Links to this post

Joe Mathlete
I just wasn't made for these times